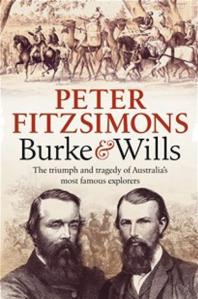 When the Murray-Darling River system is news, raising questions about how well we know our own environment, Peter FitzSimons’ Burke and Wills has particular relevance. FitzSimons tells of their expedition from Melbourne to the Gulf of Carpentaria in 1860–1861. He makes it possible to have an empathetic response to the participants, with their strengths and weaknesses, hubris and  blindness.

Australia is a very urbanised nation, despite traditions about the ‘bush’. Part of the romance of the bush is that others go there and we did not have to learn the hard lessons about the  environment they faced. Europeans also mostly had closed minds to what Indigenous Australians could teach them. It remains so.

Given the jealousies and characters of the participants, it is amazing that the expedition managed to achieve its goal. The party had separated and established a base camp at Cooper’s Creek, so a  smaller group could travel faster and reach the goal. It was tragic to miss the rendezvous (by hours) which led to the deaths of Burke and Wills. They were so close.

Characteristically, FitzSimons imaginatively reconstructs his story after meticulous research, writing in the present tense. As a journalist and communicator, he knows well what readers seek when he tells a ‘large’ and detailed story. His ‘magazine’ style of storytelling appeals to many.

FitzSimons manages to give a clear impression of how engaged Australia was with the story at the time and some of its appeal ever since. FitzSimons makes history come alive for those who never read serious history. Carefully crafting the book using original sources, referenced in great detail, FitzSimons writes in an easy-to-read way, still providing information readers may pursue. Serious readers may find his approach lacking substance.

As a church person, it is sobering to read about exploring while being over-equipped, inexperienced and so often having underestimated their progress and the obstacles. At various points along the way, they abandoned ‘baggage’ in the face of changed circumstances. It raises questions about how well we know the environment we are exploring and what equipment we need to create centres where the way of Christ is honoured in new ways, so others may establish new Christian ‘settlements’ after us.

It is a grand vision we serve and seek to promote and we, too, are called to set out on our journeys of faith.