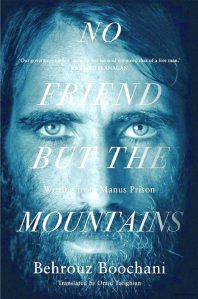 No Friend but the Mountains is a piece of literary genius, calling all Australians to account for the atrocities done in our name. The very way it was written, smuggled out of the Manus Island detention centre through text and Whatsapp messages, then painstakingly translated from Farsi to English, is astounding.

Written by Kurdish journalist Behrouz Boochani who has been incarcerated in Manus Island detention since 2013 and translated by Omid Tofighian, it is a first-hand witness account of – and an act of resistance to – our nation’s policies of detention and deterrence.

Behrouz Boochani tells his own story – and that of his friends – with empathy, respect and vivid descriptions bringing them to life through the pages. He mentions by name only those who have died on Manus Island, referring to others by nicknames and monikers. For those of us familiar with the men who have sadly lost their lives; The Smiling Youth (Hamid Khazaei) and The Gentle Giant (Reza Barati), his storytelling brings back the grief and anger we experienced when these avoidable tragedies occurred.
Each story is heartbreaking, personal and political.

The book is littered with stunning prose and searing political insight. Perhaps most significantly, Boochani tells us that Manus “is Australia itself”, no longer allowing us to use the comfort of distance to separate ourselves from this expression of cruelty in Australia’s name.

Many times throughout reading the book, I found that I was subconsciously holding my breath, in preparation for the next shocking development.

Boochani describes his journey from Indonesia to Australia, including his boat sinking and the people onboard being rescued by a British cargo ship and then picked up by the Australian navy. Boochani hauntingly describes his hope in that moment; “life has shed its love on us”.

Unfortunately, what is to follow is not protection from the terror refugees are fleeing in their home countries, but the experience of further harm at the hands of a country they had hoped would offer them protection. This book is a call to action. We can no longer say we were not aware of the horror and
cruelty of offshore detention in Manus Island – Boochani has made this devastatingly clear. No Friend but the Mountains calls us to act – immediately – to demand safety and justice for the men, women and children affected by these cruel policies of deterrence.