In the week of Sunday 7 to 14 October, Christians from the Uniting, Anglican and Catholic Churches, as well as other traditions joined their efforts with a global faith-inspired response to the climate crisis. This comes as good news after the disturbing Intergovernmental Panel on Climate Change (IPCC)special report, Global Warming of 1.5°C.

The report details how action to address climate change is urgent.

Specifically, humanity needs to move away from coal burning as an energy source and reach net zero emissions by 2050. Without more robust action, the world is on track for around 3°C of warming, a level that would put the very future of civilisation in jeopardy. It is especially bad news for the poor who are already impacted most by climate-related extreme weather events and sea level rise.

Regrettably, Australian governments are looking to expanding coal mining and export, even though we are already the world’s largest coal exporter.

The Uniting Church in Australia has a long history of engagement with these issues, with special concern for those who are most directly impacted by climate disruption. The Uniting Church is now supporting the global initiative, ‘Living the Change: faithful choices for flourishing world’. The campaign challenges believers in various spiritual traditions to make concrete commitments to living more simply, in line with their deeply held beliefs and values. 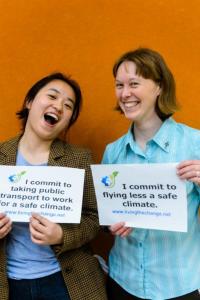 Rev Dr Peter Catt, Anglican Dean of Brisbane, is a spokesperson for the multi-faith Australian Religious Response to Climate Change (ARRCC) which is driving the campaign in Australia. He said, “Care for creation in all its forms is a moral action, a moral imperative. As our world changes, the most vulnerable among us are bearing the greatest cost of the impacts of climate change.”

During the week of October 7 – 14, faith communities celebrated a ‘Week of Living the Change’ with eight events in Australian capital cities and regional centres, and there were 70 events globally. People who attended were encouraged to make concrete long-term commitments to low-carbon lifestyle changes in the areas of transport, home energy use and diet.

The Week of Living the Change events acknowledged the personal sacrifices needed for these pledges, but were celebratory in tone, with musical performances, food, workshops and film viewings. The event in Adelaide included performances by Aboriginal dance mob, Dusty Feet.

So which changes will be of most benefit to protecting the climate? For many, the imagination seems to leap to recycling, switching off lights or replacing lights with LED’s. However, replacing incandescent bulbs with LED’s save around 470 kg Co2e (carbon dioxide equivalent) in a year while a 2kW solar array avoids around 2 600 kg of C02e. The most impactful step for the average household, however, is to switch to GreenPower, which would avoid around 5 900 kg of CO2e per year.

Probably the most impactful actions an individual can take are to avoid long-haul flights (Melbourne to London return causes around 6 000 kg CO2e) and do without a car (around 1 800 kg CO2e). It may also surprise some readers that reducing meat consumption has significant environmental benefits. For anyone consuming around the Australian national average of meat, to halve this would bring a saving of around 470 kg CO2e per year. For more on emissions which can be avoided, see here.

We are Living the Change, and we invite all people of goodwill to join us. If anyone would like to make a commitment, please go to https://livingthechange.net/commitment-tool.