At midnight on Thursday 26 July this year, seven Scotch boys and two staff flew out from Perth enroute to Papua New Guinea to embark on the world-famous Kokoda trail.

All the months of preparation were over, there was no chance to fill in the gaps, and in reality, most of us had very little understanding of the challenges that lay ahead. Seven days later, we walked through the trail’s finishing arch in the town of Kokoda. The physical and emotional challenges faced throughout the seven days of trekking had left an indelible and lifelong imprint on the  spiritual psyche of us all.

Since returning from the trek, many people have asked us “How did you enjoy the Kokoda Trail?’ Our stock answer has been that the word ‘enjoy’ does not belong in the question. For so many reasons, doing the Kokoda cannot be captured via the standard ‘did you enjoy your trip?’ question. If for no other reason, categorising the Kokoda experience as a standard trip, demeans the  history of the trek and would throw into doubt why anyone should be allowed to replicate the walk so many years later after the Kokoda conflict. For so many reasons, not dissimilar to the Camino Trail, walking the Kokoda should be seen more as a pilgrimage and an honour.

Experiencing the Kokoda provided all of us with an opportunity to reconnect with our inner self; more importantly it added to our appreciation of another part of our Australian military history.

Romans 7:22 reminds us that ‘I delight in the law of God, in my inner being.’ Experiencing the Kokoda developed and increased our understanding and empathy towards those who lost their lives  in this very place. 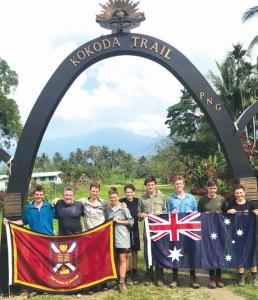 On Friday 3 August, the last day of our trek, I awoke early and sat in the dark and silence of dawn watching a small reflection service at the Isurava memorial. The Battle of Isurava took place over 26 August to 31 August 1942 forming part of the Kokoda Trail campaign of the Second World War.

The surrounding mountains were clad in low cloud, however I could see four small lights highlighting the word on each commemorative stone at the memorial – Courage, Endurance, Mateship  and Sacrifice. These words are those that lay upon the various battle grounds and continue to be synonymous with the ANZAC spirit.

Twelve hours earlier, at the very same memorial, we had conducted our own dusk service where we asked our boys to stand under the stone that most reflected how they felt about the then six completed days on the Kokoda. Without any prompting or consultation with each other, the seven Year 11s chose the stone with the word ‘Mateship’. The very word mateship conjures up lots of  ideas and beliefs. The dictionary refers to it as an Australian and New Zealand noun to reflect companionship or friendship, especially between men.

Believe me, to have reached where we were that night, it required all four characteristics. For myself and Karen Woods, a teacher at Scotch College, it was endurance and courage that respectively defined our personal experience; for the seven Scotch College boys, like the many young men who tragically lost their lives on the Kokoda in the Second World War, it was mateship that kept them together through adversity.

This trip also allowed our boys to spiritually and emotionally connect to some of our Old Scotch Collegians who were members of the 2/16 Battalion in Papua New Guinea, young men who had lost their lives way too early; Lieutenant PR Gorrie (aged 26), Corporal JSG Mackintosh (aged 22), Lieutenant ERI Allnutt (aged 27) and Lieutenant TN Hill (aged 23).

For those of us fortunate enough to reside in a place free from major conflict and for those who are no longer with us ‘Lest We Forget’.

This article is dedicated to the many brave souls who lost their lives in conflict on the Kokoda trail so that we could have the chance to reside in peace and harmony.