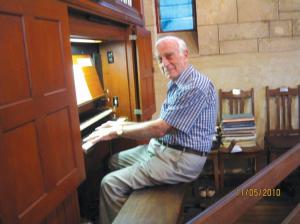 Geoff Dimmock grew up in NSW and completed his formal education at Sydney University graduating with a degree majoring in Soil Science. One of the common themes of those who spoke at Geoff’s funeral service on 19 April at St Aidan’s Uniting Church Claremont was his great ability to mix with a variety of people and discuss aspects of soil science along with those of life in general — family matters, gardening and music.

Geoff became a member of the Organ Society of WA in 1973 and remained a staunch supporter of the society through to 2015 when developing illness prevented his attendance at functions.

As a member of St Aidan’s Uniting Church Claremont, Geoff became fully involved in the life and activities of parish life. One of these activities was as organist, the St Aidan’s organ being the first  of Cecil Clifton’s five organs and built between 1875 to 1879. Geoff’s deep understanding of the place of the hymns in the liturgical setting allowed him to make appropriate choice of hymns and  tunes for any service. Importantly, he played in a manner that supported and enhanced congregational singing.

The Organ Society of Western Australia members farewell Geoff with fond memories of a real gentleman and musician. We offer our condolences to his remaining children and grandchildren.  Geoff’s wife Joan sadly passed away in December 2010.