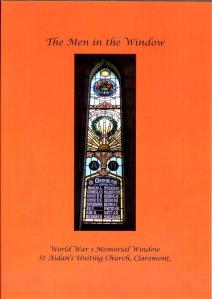 As she sat in the pews at St Aidan’s Uniting Church in Claremont, Judith Amey’s gaze would often fall on the stained glass window on the eastern wall during Sunday service.

At the base of the window were 16 names inscribed in the stained glass, men who had died in the First World War. It was an honour roll of men from the Claremont district, many of them with families connected to the church.

Amey began to wonder who they were; what was their background, who were their families, when and how had they died in the war?

Amey decided to investigate further. Her research has resulted in a slim, but evocative book, The Men in the Window.

Typical of the 16 men was Lieutenant Gordon Gemmell, whose Irish family moved from Melbourne to Perth in 1900. Gemmell trained as a teacher at Claremont Teacher’s College and was among the first intake of students at the University of WA. Gemmell saw action at Yypres in 1917, and in 1918 was leading a charge of his men in the final assault against the Germans when he was killed by machine
gun fire.

Coincidentally, Gemmell’s 15-year-old great great niece in Queensland, Meg Gemmell, won the 2015 Premier’s Anzac Prize for high school students for her essay on her relative, which won her a trip to Gallipoli.

Amey’s research also revealed that the stained glass window was designed by George Pitt-Morrison, a longstandingand prominent member of the congregation. Pitt-Morrison was a leading figure in the WA art scene as curator of the Art Gallery of WA and painter of the 1929 Founding of Perth large-scale oil canvas featuring Mrs Dance chopping down a tree to found the colony.

In the introduction, Amey says her book was a personal project to ensure the names on the window became people, not anonymous names.

Amey discovered that some of the men had strong family connections to St Aidan’s, while others had been included because of their links to the Claremont community and would have been known to the congregation members.

She discovered that of the 16 men honoured, all were single except for two who left behind families.

The Men in the Window is available for $20. Proceeds of the book will be donated to a church fund to provide a perspex shield to protect the window. To purchase, phone 9388 1242.