Rev Denise Liersch, Moderator Elect of the Uniting Church Vic/Tas, travelled to Germany as one of three Uniting Church representatives to the World Communion of Reformed Churches,  celebrating the 500th anniversary of the Reformation, from 29 June to 7 July. She shares her experiences with Revive.

A couple of months ago, I stood in front of the castle church in Wittenberg where, 500 years ago, Luther nailed his 95 theses to the doors. Well, not to these exact doors; they are no longer made of wood, and Luther’s 95 theses are now cast into the bronze of the doors. As I stood there in front of the doors, repair works were being undertaken to the old stonework around the new doors. The  church as a whole isn’t quite the same as it was either; it has had a lot of work done to it since then… I hope. 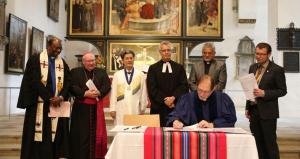 The signing of the Joint Declaration on the Doctrine of Justification.

In fact, the 1 000 or so people with whom I was gathering in Germany were praying for precisely that: that the Spirit of God would continue working on the church, the body of Christ. ‘Living God,  renew and transform us!’ was our theme for the General Council of the World Communion of Reformed Churches (WCRC). I was in Germany as one of three Uniting Church delegates to the   General Council (GC) of this international ecumenical body of which the Uniting Church is a member. The GC is held every seven years, this time coinciding with the 500-year anniversary of the  16th century Reformation of which Luther was a part – though the important reformers for the WCRC member churches are Calvin, Hus, Knox and others.

We met mostly in Leipzig, home of the peaceful revolution that sparked the fall of the Berlin Wall, but we also spent one day in Berlin, and another in Wittenberg. Over the 2 weeks of the GC, around a thousand people from over 230 member churches came together, representing 80 million Christians across the world. From many different cultures and with many different languages,  we talked, ate, prayed, worshipped and sang together; listened to and learned from each other; discussed and discerned God’s leading together; and made decisions that we believe are the will of God for our world and church today.

We tackled issues of injustice, conflict, corruption, poverty, abuse of power and exploitation across our world, focussing in several main areas: theology, justice, gender justice (including adoption  of a Declaration of Faith on Women’s Ordination), communion in mission and strengthening communion. We were encouraged by internationally renowned biblical and theological scholars to  regain the Reformation spirit of protest and resistance to the death-dealing powers of division, conflict and oppression by the empires of this world.

Ironically, Luther’s protest and that of the Reformation led not just to the reforming of the church, but also to conflict, division and splitting up of the church. The General Council charged  member churches to take up the ‘unfinished agenda’ of the Reformation: constant renewal of the church. The day in Wittenberg marked this by signing on to a statement that declares unity in understanding amongst Catholics, Lutherans and other churches on the very doctrine which separated them back in the 16th century.

The doors of the castle church in Wittenberg with people conducting repair works.

So there I was: standing in the church where 500 years earlier Luther preached and worshipped, as the Joint Declaration on the Doctrine of Justification was signed. It reminded me of the words attributed to Luther as he stood before his accusers at the Diet of Worms: “Here I stand. God help me.” These were words of protest, conviction, determination to take a public stand for what he  believed was right, willingness to be held accountable for what he believed in, prayer for transformation of the church, and of trust in God to hold true, both to himself and to the church.

In a period of transition in the life of the Uniting Church, may we pray, not to find ways to shore up our church as we know it, but for ongoing renewal in the spirit of the Reformation.

For more information on the World Communion of Reformed Churches visit wcrc.ch.