Two years ago, Rowan and Jenny Berger set off to Vanuatu to work in the local medical industry. Jenny is a registered nurse, Rowan a paramedic. Revive reported about their plans with MED  Project prior to their leaving, in June 2015.

The couple had originally planned to stay in Vanuatu for a year, but after receiving amazing support from individuals and churches they were able to stay 18 months, plus donate remaining funds to two local community projects: a domestic violence centre and a youth centre with a free sexual health clinic. A large proportion of funds raised was thanks to their own church, Victoria Park and Districts Star St Uniting Church, who put in a major effort for the entire 18 months, led by congregation member Dianne May.

Rowan and Jenny agreed that being able to spend an extra six months on the island was a great help, as it took around that same amount of time to settle in. 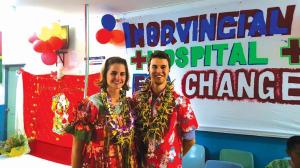 “Building relationships was key to being able to do anything,” said Rowan. “You couldn’t do anything without a strong relationship or trust with who you’re with, and probably the first six months we were there was mainly focussed on that. That’s why we were so lucky to have that extra six months at the end.”

The pair spent their time working with a team of other volunteers and local medical staff. Rowan’s time focussed on helping build up the local ambulance program, running training programs for  the drivers. Jenny worked in health promotion, particularly around sexual health, and screening in the community, including preventative education of lifestyle diseases such as diabetes and heart  disease, which unfortunately are common as western influences are being introduced. This meant visiting lots of different areas, including remote communities.

“Over here, if you have a stroke or an amputation there’s lots of rehabilitation, there’s lots of support. Over there, you can just see the hope leave their eyes because there’s no such thing as rehab.  So we’re trying to prevent that,” said Jenny.

They were also involved in various other professional development and training programs, including disaster scenario training which involved hospital emergency staff, as well as people from the  police force, fire brigade and army. As Vanuatu is prone to disaster, particularly cyclones, Rowan and Jenny were excited to see that structures are in place for these kinds of events which can cause large amounts of casualties.

Having been back in Australia for a few months, Rowan and Jenny have both found new passions within their industries as a result of their experience in Vanuatu. Jenny is keen to build-up training to work in sexual health, and Rowan in providing paramedic training and mentoring to new staff. 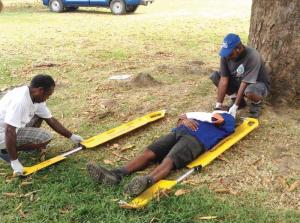 One of the biggest lessons they’ve brought home with them is the importance of family and community.

“If one guy was sick and couldn’t afford to [get to hospital] the whole community would pool together their money to send him on the plane to the island to go get checked. They had so little, but they gave so much,” said Rowan. “It has opened my eyes to a different way of doing things; a different way of life and what’s important in life. I guess at the end of the day the only important thing  in life is the service of others, and they were doing that so naturally and so easily.”

“It was so valuable,” Jenny added. “I feel so thankful that we got to have our worlds changed; our eyes opened to a different way of living.”

To find out more about Rowan and Jenny’s time in Vanuatu, including details of the work they were involved in, find them on Facebook at MED Project.