This year, Kids’ Camp Out (KCO) celebrated the 40th anniversary of the Uniting Church in Australia with a massive birthday party.

Kids from congregations all over the Uniting Church WA joined in with party food, games and dancing on the Saturday night of the camp, 18 March. The night included well-loved party games such as pin the tail on the donkey, limbo, giant jenga and pass the parcel. A disco dance rounded off the night before campers headed back to their congregation groups for a story and supper.

Members of the wider Uniting Church WA were also invited to join in the celebrations with the adults playing their own party game; trying to land bouncy balls into cups.

KCO is an annual camp,  this year running from 17–19 March. It invites congregation groups from around the church to bring along primary school aged kids as campers, and high school students as junior leaders. The weekend was a great time of getting to know other people around the church for those involved.

For more info and to get involved in next year’s KCO contact Janine McDonald, First Third officer at the Uniting Church WA on 9260 9800 or email janine.mcdonald@wa.uca.org.au. 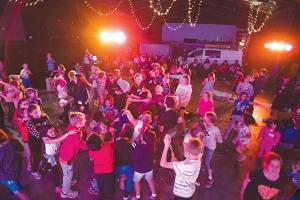