Once upon a time, crafting and mending was a necessity for many women. These days it can be a pleasant hobby – but for some it is so much more.

Creating a connection between women and their ancestors, there is a new generation of crafters who use their heritage to fight for what they believe in. While not necessarily a new phenomenon,  mixing craft with social activism has recently hit the spotlight in a big way. Inspired by the rise of the Pussyhat, Heather Dowling explores the world of ‘craftivism’.

In the United States of America (USA), a sea of pink could be seen at women’s marches all over the country following the announcement that Donald Trump would be their next President. In  response to Trump’s “Grab them by the pussy” line, thousands of people around the world have bonded, marched, sang, laughed and yelled to get the message across that women are not objects.

A simple pattern, written by Kat Coyle, the Pussyhat is a hot pink beanie with little cat ears. It may be cute, but its message is fierce: don’t mess with a woman who knits.

In the lead-up to womens’ rights marches in Washington and across America in January, and the global International Women’s Day in March, knitting groups around the world have been meeting for the sole purpose of creating the hats to pass on to others, so that as many women, and men, as possible could wear one at these events. An image of a lonely hat even made the cover of Time  Magazine.

While the campaign originated in the USA, co-founded by Krista Suh and Jayna Zweiman, the concept has resonated with people around the world, including in Australia. 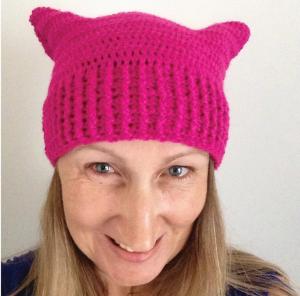 Wendy Hendry, from Margaret River Uniting Church, has been busy crocheting Pussyhats. After making one for herself and posting it to her Facebook page, she’s had further requests from friends and family to make more, making about 13 hats in total. For Wendy, crocheting is not just a hobby, but a therapeutic activity and a connection to the women who’ve come before her.

“Growing up, my mum and nanna were always knitting or crocheting,” she said. “My mum taught me quite young, but it wasn’t until later that I really started doing it myself.

“Since we have moved to the country, I have been crocheting even more, and it has seen me through some difficult times. I feel a deep connection to my nanna, great aunt and mum when I am   crocheting – it is a somewhat lost art, but deeply satisfying to make something from scratch. I get called a granny regularly, but I don’t care, I take it as a compliment.”

The blend of craft and activism was the perfect mix to entice Wendy to get involved in the Pussyhat Project.

“I have been following the US political situation in the lead-up and after the Trump election. As a feminist, I have been deeply concerned about the potential threat to women’s rights that have  been so hard fought and won through history,” she said.

“I loved that I could crochet, something I love to do, with a little bit of political activism on the side. I’ve always loved the idea of craftivism – the power of a particularly ‘female’ nonviolent activism (yes there is a group of male knitters that do craftivism very well too), but never had the opportunity to take part in any. So this was a nice way for me to feel connected to women through the ages, and across the globe.”

As Wendy explains, the term ‘Pussyhat’ is a way of reclaiming what was originally an insult into a symbol of strength.

“It’s like reclaiming a word that has been used in a negative way and turning it into a positive,”she said. “What started in the US has become an international symbol for feminism.”

While the Pussyhat Project has had huge success around the world, the idea of craftivism isn’t new. The term itself was coined in 2003 by writer Betsy Greer, but the concept has been used throughout history. Knitting or crafting as a way of providing care is also widely done, as is often seen through charity work.

Betsy defines craftivism as “a way of looking at life where voicing opinions through creativity makes your voice stronger, your compassion deeper and your quest for justice more infinite.”

The Knitting Nannas are an informal group who are doing just that.

The Knitting Nannas also originated in the United States of America, but have since spread around the world. In WA there are four groups: Perth, Mandurah, Geraldton and the Shire of Irwin. Across the country there are many more.

Formally known as the Knitting Nannas Against Fracking, their main concern is the damage being caused to our environment and farmers through unconventional gas extraction. The Knitting Nannas are a nonviolent group who turn up to events dressed in yellow and black – the colours of the Lock the Gate Alliance logo – and knit and chat. Their welcoming presence is an icebreaker  for many, who are intrigued to come and ask them what they are all about. The group also knit objects of symbolic action, like blankets with slogans knitted into them and other bits and pieces.

Lynda Willis joined the Knitting Nannas about a year ago. She had recently retired from paid work and was wondering what was going to come next in her life. Joining the group has been a  blessing for Lynda, as she has connected with new friends who are working together for a common cause.

Lynda’s first project with the Knitting Nannas was an envelope for a letter against fracking from farmers from the Mid-West addressed to Sean L’Estrange, the former Minister for Mining and Petroleum.

“I’d never knitted an envelope in my life, I just said yes I’d do it and funnily enough it worked!” Lynda said. “It helped break the ice because we were in this beautiful conference room in  Parliament House explaining why we were against fracking. I was the newest member and didn’t really have a lot of information, but I was able to hand over this letter in this knitted envelope.”

Lynda believes that the creative side of craftivism is what makes it work.

“It’s a creative way of getting across the message,” she said. “Somehow or other we start with something simple, but it becomes creative. There seems to be something about that.

“It’s a nice way to communicate with others; it’s not confronting like sitting in a debate.”

Alison Atkinson-Philips, member at Victoria Park and Districts Star St Uniting Church, has also used her love of craft to act for a local cause. When their local primary school decided to turn part of the school oval into a carpark, many of the parents were against the idea, and a ‘knit-in’ was held.

“The knit-in was a small part of the campaign, aimed at delaying the work while we pursued other ways to have the decision reversed,” Alison said. “We met at the school early one morning, and  everyone sat on camp chairs with some green knitting in order to make it difficult for the work to proceed.

“The green of the knitting was a statement about the loss of public green space – the oval had originally been gifted to the school by the local community, and it didn’t seem right that it was able to  be turned into a carpark without wide community consultation.”

While the community response to the campaign was great, unfortunately for the group, the carpark did go ahead. Like Wendy, Alison said that bringing craft and activism together seemed like a  natural progression.

“I learned my mad crafting skills from my mam and my church aunties growing up – they were always putting their craft skills to use for some fundraising activity or other.

“I’ve been involved in activism of various sorts since I was at university in the 1990s, so it makes sense to bring the two things together. I suppose there’s also something I like, as a feminist, about  taking those skills that have been passed down by generations of women and putting them to public use.”

Being with others with like-minded interests is also a bonus.

Lynda believes that being part of the Knitting Nannas, a group with common interests and an outward focus, encourages her to act on a cause she is passionate about.

“It’s lovely to be part of a section of the community that you can really gel with; that you’ve got the same ideology, the same environmental values. It’s really uplifting and sometimes you need that because other times you can look at things and think ‘gosh the world is really going downhill.’

“It is meditation. Now that I think about it, none of us are actually knitting anything for ourselves. It’s all for the greater good.”

One thought on “Crafting for the greater good”