A rededication ceremony was held on Sunday 27 November to commemorate the relocation of a memorial for Rev David Shearer from St Andrew’s Uniting Church to its original setting at David’s gravesite in East Perth Cemetery.

Prior to his career as a minister, David was a school teacher, a profession he worked in until he was licensed to preach by the Free Church Presbytery of Edinburgh in 1871. He was ordained the following year. David was given a commission from the Established and Free Churches of Scotland to establish the Presbyterian Church in Western Australia. He sailed from Gravesend, with his  wife Margaret and family, arriving in Fremantle in October 1879. 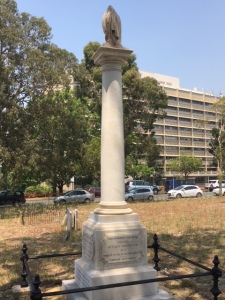 Speaking at the rededication ceremony, Uniting Church WA moderator, Rev Steve Francis said “When Reverend David Shearer arrived with his family in Perth in 1879, Perth was a small, fragile  outpost of the British Empire.”

David was working in what seemed to be a hostile environment as Steve explained, “Convicts burnt the first church in Australia and Presbyterianism was viewed with suspicion by Anglican,  Catholics and Methodists alike.

“How we face the challenges of our times is of vital importance if we are to survive and indeed thrive as a Christian community. For me, the key is Jesus Christ.”