Yurora NCYC 2017, the Uniting Church in Australia’s National Christian Youth Convention, had its genesis in 1955. These days it is a festival of art, music, theology and fellowship.

Yurora runs for five days every two to three years with hundreds of young people from across Australia attending. This year, it was held from 8–12 January in Sydney with a program including Canadian group  Tim Neufield and the Glory Boys, and a whole crowd of Australian artists, including Pirate Church, who feature in this edition’s profile story on page 6.

Covering dozens of important social and theological topics, festival goers attended sessions throughout the day learning about issues like reconciliation, multicultural worship, the intersection of  environmental care and theology and a host of other hot issues.

Charles Babalola attended after hearing about the festival from his minister at Willetton Uniting Church. He said that the Bible studies were one of the main highlights of his experience at Yurora.

“In the Bible studies with Jools Hamilton [Irish Methodist minister], we learned about breaking down barriers. In our culture, we do things that often create barriers between us and other people, so it was good to learn about that,” Charles said. 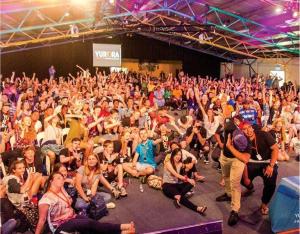 The Bible studies were also a highlight for Shaun Ashman, who attended from Victoria Park and Districts Star Street Uniting Church.

“I went to a talk about women in ministry, but it also went for everyone, and we were told to look to God and be challenged. These are things that really hit me and I wanted to keep,” he said.

The format of the event was also a hit with Kaitlin Dunn, from Rockingham Uniting Church.

“The festival style is really good because you get to pick and choose what you want to do,” she said.

Along with the educational elements of the Bible studies, festival goers had entertainment galore to choose from and bond over.

“We had a lip-sync battle and afterwards we had a dance party where we managed to all choreograph a dance to Let It Go, without even realising we were all doing the same moves!” Kaitlin said.

Making new friends and connecting with other young Christians from across Australia is constantly cited as one of the highlights of Yurora.

Shaun said meeting other people was also his highlight from Yurora.

“Meeting so many amazing people from all over Australia was great. I now have two good friends in South Australia and two more in Sydney,” he said.

One of the great benefits of Yurora is the sense of fellowship and purpose that results in the young people who attend. Having met so many new people from so many different backgrounds these young people yearn to make a difference in their own communities. All of them stated they want to make church more accessible for young people, and to create ways and places for young people to actively participate in church.

The Uniting Church WA sent almost 40 young people from WA to Yurora this year, with a contingent of at least eight people from Uniting Aboriginal and Islander Christian Congress WA  congregations.

Kaitlin, Shaun and Charles all found out about Yurora through their churches and youth groups, and jumped at the opportunity to meet other Christian young people and learn more about God.

Asked if they would recommend Yurora to other young people they all enthusiastically said “Definitely, go!”

Top image: Some of the WA Yurora 2017 attendees touring the sights of Sydney.