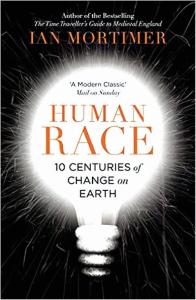 Over the past millennium of plagues and exploration, revolution and scientific discovery, women’s rights and technological advances, human society has changed beyond recognition. In exploring this change, Mortimer cites belief in God 116 times as the most significant agent of change.

It was the Catholic Church’s perception of God’s will that resulted in the ‘peace movements’ and discontinuation of slavery in the 11th and 12th centuries. It was Christian monasticism that led to  the 12th century renaissance and beginnings of learning and science. After the reformation and printing was invented, the study of God in the Bible led to widespread literacy creating better  government which in turn caused the decline in personal violence.

Exploring God’s creation led scientists to uncovering the mysteries of the universe and nature. Belief in God’s healing powers gave many 17th century physicians the confidence to heal the sick. In the 19th century it was the understanding that God had made everyone equal that led to equal rights of men and women, black and white, rich and poor as the only defensible moral standpoint.

Only in the 20th century did God’s influence decline, but Mortimer predicts that religion will again rise to meet humankind’s global challenges.