Three years ago, the Uniting Church in Australia, in conjunction with the Uniting Aboriginal and Islander Christian Congress (UAICC), established a conference for young adults. The National Young Adult Leaders’ Conference (NYALC) is run each year to provide an opportunity for young people in the church to meet, network, be refreshed and to learn and develop their leadership skills.

This year, NYALC was held from Friday 8 to Wednesday 13 July in Burleigh Heads, Queensland. A cohort of eleven young people from Uniting Church Western Australia and UAICC Western Australia congregations attended the conference.

Jack van der Pal, from Rockingham Uniting Church, was one of the young people who attended.

Jack is in his final year of a double degree in Geology and Geophysics at Curtin University. He serves his congregation in music, audiovisual, and helps to run the young adult ministry.

On why he chose to go to NYALC Jack said, “At first, I was a bit unsure and then I started speaking to people [who had attended previously] and they said that it’s amazing when you get so many young people together. So I wanted to go and discover what it was like for myself.” 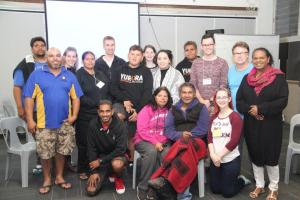 The WA cohort that travelled to Queensland for NYALC 2016.

Even though he attended with high expectations Jack said, “It blew me away, quite honestly, because we had so many people from so many different cultures and they got along like a house on fire. When speaking to a lot of these people you could just see that they shared the same passion for Christ, it was like speaking to an old friend.”

Since leaving NYALC Jack has been in touch with dozens of other Uniting Church members from all over Australia.

“It was a real eye-opener, especially coming from Western Australia, to learn how big the Uniting Church is, there are so many congregations. Each congregation has their own way of doing things, but at the same time they are all so similar as well.

“When you put a group together, these people just come from everywhere and they get along so well, it really shows that the differences just aren’t that big.”

At NYALC young people had the opportunity to learn about how churches can engage their teens and young adults, to encourage them to be passionate about Christ and the church. Jack  explained that seeing how congregations make the time and space to develop relationships with younger congregation members has fostered an inter-generational environment and contributes to a strengthening of the relationships between young people and God, something that he hopes to be able to do back home in WA.

“Sometimes people see what they do for the church as a chore or a job. If you can inspire and build-up that passion within someone, they can really enjoy and find peace in what they’re doing and knowing that they are doing it to help others to find that same connection with God themselves.

On discussing issues held in common by many of this year’s NYALC attendees Jack said, “Not every church has a young adults group with a hundred people, but I know there are some churches that don’t have any people in those demographics and that’s a real concern for a lot of people. It’s a really hard question to answer of filling that void or fixing that gap. It’s really cool to be able to connect with people from churches who don’t have that problem, or have had that problem in the past, and to learn how they’ve conquered that.”

Jack’s suggestion for addressing the problem of a demographic imbalance in congregations is to start small and start off by creating a space for those people. Eventually people will start coming to those events or functions. But you do need the structure and time, the right kind of leadership and passion behind it all as well.”

He stresses that this space looks different for each congregation.

“To be honest, just setting a time where people can meet up in the church, working out what their needs are and really connecting with those people on a personal basis. Not just teaching them about God, but also learning what’s going on in their personal life, and also a lot of prayer helps too.”