There’s an old saying: “We cannot do great things, only small things with great love.”

Sometimes, perhaps we can do both.

Kakuma refugee camp is a sprawling mass of humanity on the border between Kenya and South Sudan. Under canvas and tin supplied by the UNHCR, the United Nations Refugee Agency, and the  Kenyan government, more than 150,000 people make their homes, many separated from brothers, sisters and parents by fighting across the border in South Sudan and Somalia. Into this  maelstrom, another little life emerged last month. Her name is Deborah. She might never have been.

It was an ordinary morning for young South Sudanese midwives completing their prac in the Kakuma Mission hospital. Many in their early twenties, they’ve been relocated with the help of the  Uniting Church in Australia from the South Sudanese town of Leer due to heavy fighting. Their training facility was torched. Some of the women don’t know where their families are – many fled  into the surrounding bush as rebels stormed the area. Husbands are missing. Children.

The young women carry on with their studies, supported by UnitingWorld partner, the Presbyterian Relief and Development Agency of South Sudan. They’re determined to finish their midwifery  courses and when stability returns, go back to their country and serve their sisters. In the meantime, they study at Kakuma and serve their fellow refugees. 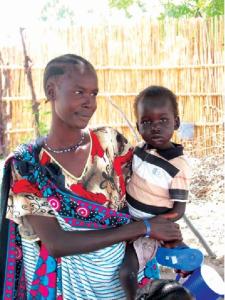 Gifts from Everything in Common help support midwives like Deborah, pictured here.

“A woman from the camp was brought  in to us,” recalls trainee midwife supervisor, Rachel. “She was haemorrhaging and her child experiencing fetal distress. An emergency caesarean was  required to save her life and the life of her child. She was South Sudanese and spoke only Dinka, and the doctor requested that our student speak with the distressed woman in Dinka and explain  the procedure to her.”

Further complications arose and permission needed to be granted for an operation that would save the mother’s life – but also make it impossible for her to have further children. Again, the student midwife was called upon to assist, patiently persuading the family of the absolute necessity of the operation in spite of the risks and long-term outcome. Some hours later, a healthy child  was born and the mother’s life also saved.

“As the mother began to recover, she told our midwife, Deborah, how much her support and encouragement had meant to her.” Rachel says. “It was so important to the young mother that she has  named her child after the midwife – Deborah.

“In South Sudan, too many mothers and babies die in childbirth,” Deborah says. “I have wanted to be a midwife since I was in primary school. I want to make sure that mothers don’t suffer.”

It’s pretty amazing to reflect on this love and determination, given that these young women are themselves displaced from their homes, living as refugees with no way of knowing where their  families are or when they might see them again. As Christmas starts to creep closer, this year give gifts that do great things, with great love. UnitingWorld’s Everything in Common catalogue has a  range of gifts that help you support people like Deborah in South Sudan, saving the lives of mothers and babies. Or you can help train Christian leaders to share the good news of Christ in India,  the Pacific and Africa.

Go to www.everythingincommon.com.au to select a gift. In honour of those you love, you’ll be helping create change where it’s needed most.