In December 2013 and March 2015 I travelled to Mae La refugee camp on the border of Burma and Thailand as part of my work for Act for Peace, the international aid agency of the National Council of Churches in Australia. The people of Burma have lived through the longest running conflict in the world. Hundreds of thousands have fled their homes for neighbouring Thailand and now live in refugee camps, like the one I travelled to.

Whilst there I met Than.

Than was just a boy when he saw his village being burnt to the ground by the Burmese army. He walked day and night with his family, with no food or water, finally finding safety here, in Mae La refugee camp.

I remember so clearly Than talking about the safety he had found in Thailand yet the desire to go back home, “Life in Mae La camp is better than in Burma. Because I grow vegetables I can support my family.”

Like many refugees Than has been living in Mae La refugee camp for more than 21 years and he desperately hopes that one day, it will be safe enough to return to Burma. 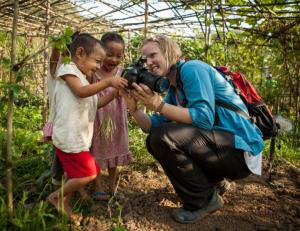 Life for Than and the many others like him is tough. Confined to the camps and without an official way to earn a living, he relies on food rations to survive.

When I first saw the rations Than and his family had to survive on I was in shock. He and his family have to survive on just a small amount of rice, flour, salt, fish paste, split peas and oil. Their rations for the month fit in one small corner of the kitchen. But the thing that got me emotional is that funding for even this small amount of rations are running low and the rations may have to be cut yet again.

Seeing these rations, it made me think that in Australia we live in one of the richest countries in the world, and yet people just don’t seem to care about the refugees in places like this, who have nothing.

How can it be right to turn our backs on people in their time of need?

Together I believe that we can inspire people in Australia to be more compassionate, and make a real difference to the lives of refugees like Than, living here in Mae La camp.

On returning to Australia my colleagues and I developed the Act for Peace Ration Challenge. This June during refugee week I am taking the second ever Act for Peace Ration Challenge – and we need as many people as possible to join us. I will be eating the same rations as Than for one week, sharing my experience with my friends and family, and asking them to sponsor me.

Together I believe we will change attitudes in Australia towards refugees – starting with our own. And the money we raise will provide rations, seeds, tools and training to help ensure people like Than have enough to eat – now and in the future.

To register today to take the Ration Challenge, visit http://actforpeace.org.au/rationchallenge.

Top image: Than with family at the Mae La Refugee Camp in Thailand.