Advocates for children suffering in detention welcome today’s decision to release SOME of the children from detention, but intend to stay until they have a timetabled commitment from the Government for ALL children to be released.

Christian leaders concerned about all vulnerable children in Australia’s detention centres are holding a prayer vigil inside the Camberwell electorate office of Josh Frydenberg, Liberal Member for Kooyong and Parliamentary Secretary to Prime Minister Tony Abbott.

The group entered Mr Frydenberg’s office at 10.00am and say they intend to remain until they get a timetabled commitment from the Government that all children will be released from immigration detention centres.

The group welcomes today’s decision by the Government to release a small contingent of children and celebrate this as victory for the whole movement and is a step forward in the right direction.  However, there are still grave concerns for the 662 children outside the criteria of release who will remain in detention and we will not stop until every last child is released from the cruelty of detention. 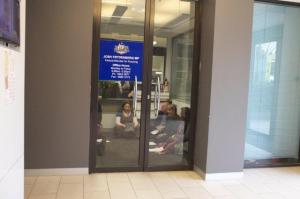 The protest follows a series of prayer-centred sit-in actions that has sparked a nationwide Christian movement called Love Makes A Way. More than 50 religious leaders from a wide range of denominations have been arrested over the past four months after holding prayer vigils in offices of MPs from both major parties, including Prime Minister Tony Abbott and Opposition Leader Bill Shorten, and most recently the Treasurer, Joe Hockey.

All participants are members of churches that have been strongly advocating for more humane approaches to asylum seekers, particularly around the detention of children. They feel compelled to participate in nonviolent direct action in light of the failure of both major parties to protect the wellbeing of people seeking asylum. 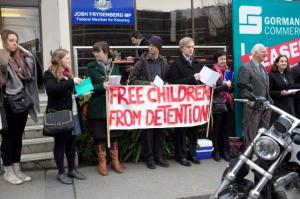 Reverend Alexandra Sangster of the Uniting Church is also an actor who has appeared in Australian TV dramas such as Blue Heelers and Halifax f.p. and currently works with Melbourne Playback Theatre  Company.

She said,“I have been preaching about this issue for more than 10 years and the situation has just grown more and more distressing. It’s time for some incarnational action – putting the body on the line for  the children whose bodies are behind the wire. I don’t want my three little girls knowing that there are children locked up and their mama did nothing to try and set them free.

“If it were my children in that situation, I would hope that someone would take action on their behalf. I can’t just stop at writing a letter or signing a petition when children are being harmed. I have thought and prayed long and hard about this, and believe this is a Christ-like way of appealing for change.”