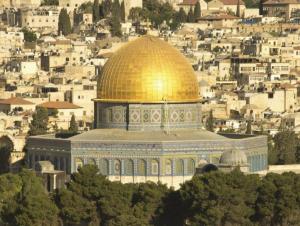 The Dome of the Rock in Jerusalem.

It is good to be home after our long overseas trip followed by a brief visit to a very successful Yurora NCYC 2014 in Parramatta. Viv and I hope you had a happy Christmas and wish  you every blessing for 2014.

Our time in the Holy Land was a particular blessing to us both. We spent ten wonderful days as pilgrims travelling with twelve other pilgrims in what must be the place of pilgrimage for Christians. Even the worst snowfall in Jerusalem for 100 years, freezing temperatures at night and the heating breaking down in the college didn’t prevent us from soaking in the  pure wonder of just being there.

I still find it amazing that it is possible to stand before the blue and gold of the Dome of the Rock on the Haram al-Sharif – the Noble Sanctuary to Islam, the Temple Mount for  Christians and Jews. Then after a short walk stand and pray at the Wailing Wall side by side with devout Jews. After another short walk kneel in the empty tomb of Christ in the Holy  Sepulchre. Three of the most sacred sites for Jews, Muslims and Christians – all in the same day.

I think because we visited at such a quiet time in the season we were fortunate to  experience some very special times. As a group we had free time to walk beside the Sea of Galilee on a misty morning and watch as a storm moved across the waters; time to explore  the Church of the Transfiguration on Mount Tabor with its beautiful mosaics; time to stand in the Crypt of the Church of the Nativity without queues or interruption; time to walk  the Way of the Cross in quiet, empty streets, carrying a simple wooden cross and taking turns saying the Liturgy of the Stations of the Cross. We were even able to stand in the inner sanctuary of the Holy Sepulchre, with the doors closed behind us and listen to priests saying mass on  the stone slab of the empty tomb.

On reflection, the most memorable time was when Viv and I sat drinking coffee in an office on the Haram al- Sharif. As we walked around the Dome of the Rock, radiant with its surrounding snow, our guide, Bishara, asked if we would like to meet the High Sheikh. So Viv and I sat and drank coffee with, talked – but mostly listened to – a gentle, wise Islamic  Sheikh, the second highest Cleric in Israel, as he shared his thoughts on peace in his troubled land.

In a land of so much conflict, so much bitterness and violence, he spoke of peace and freedom and equality for all as God’s desire. God’s desire for Jews, Muslims, and Christians, for  Jews and Arabs, for men and women, for all who find a home in this sacred and troubled land. He was in some way answering the question ‘who is my neighbour’ in his own context.

So, how do we answer the question ‘who is my neighbour’ in our own context?

Rev Ron Larkin, moderator of the Uniting Church in WA