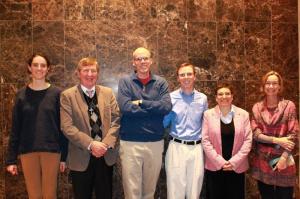 At the last Synod meeting for the Uniting Church in New South Wales (NSW) and the Australian Capital Territory (ACT), a bold decision was made to divest in companies involved in the extraction of fossil fuels (coal and coal seam gas) as they seek to invest, instead, in renewable energy. It was a big step for the Synod, and a decision that wasn’t taken lightly.

But what is ethical investing, and why should we be thinking about it?

When money is invested into an account, the financial institution’s role is to make the most out of it they can, by buying and selling shares – this is where ethics comes in. Without  doing the research, you could unknowingly be buying shares in companies involved in weapons, gambling or tobacco, just to name a few.

But it doesn’t have to be that way. Lots of people have made intentional decisions to invest ethically, rather than blindly letting someone else deal with it.

Simon O’Connor, chief executive of the peak body for responsible investing, Responsible Investment Association Australasia (RIAA), says that ethical investing is all part of being  an informed consumer.

“Investing ethically is all about aligning your money with your values,” he said. “For many of us, we go to great lengths in our daily lives to support good causes or avoid products  that do harm. Investing ethically – or in the broader context that it is often spoken of today, responsibly – is simply an extension of being a considered consumer.”

In considering these things, many people often think about where not to invest, depending on where their values lie.

But as Simon says, “On the flip side, many are also concerned  not only about avoiding companies, but supporting companies or communities that they see as building a positive future.

“Common themes that are often targeted by ethical investors are renewable energy or investments that alleviate poverty.”

Rev Brian Carey, ethicist and member of the Uniting Church in WA’s Investment and Corporate Finance Committee, agrees adding that it’s important to look at the big picture. A  company could be questionable in one area, but be doing a lot of good in another, so it’s about weighing up concerns and making a judgement call.

“When you look at a company for investment, [it’s about] not only the source of those returns, but what are they giving back?” he said.

“There’s always a  chance to re-examine what we do,” she said. “This is a matter we have to always keep our eye on, because as soon as you examine one matter, another pops up. So  it’s a huge amount of work.”

Which is exactly where the NSW/ACT Synod are presently as they figure out how their decision to divest from the coal industry will take shape. Justin Whelan, mission  development manager at Sydney’s Paddington Uniting Church, was one of the people who brought the historic proposal to the Synod for consideration, along with Dr Miriam Pepper  from the Synod’s eco-network, Uniting Earthweb.

Justin said that the need to divest was an important way forward for the Synod. “It’s important for the church to put its money where its mouth is and to declare it’s not willing to  profit from the destruction of the earth,” he said. “It sends a signal to the coal industry and to the government that the Uniting Church is deeply alarmed at the lack of serious action  on climate change.”

Justin said that the NSW/ACT Synod’s Ethical Investment Monitoring Committee is now looking into which companies they should consider divesting from. But he added that these  are not ‘bad’ companies, rather their product is no longer viable for the sustainable future of humanity. There are many ways to think about investing ethically, including in  property.

In terms of financial institutions, Simon O’Connor says that there are lots of opportunities to make sure your money is being looked after responsibly, from  superannuation funds to  looking after your cash in the bank.

“The onus really is on you to ask the question, ‘what’s my money up to?’ That means calling your super fund or financial adviser and asking them if your investments align with your values,” Simon said. “But to start the process properly, consumers should think about what they would want to support or avoid in their own investments. All investments will  document the philosophy that they apply to their investment process, whether through a statement of values or a charter, or in their product disclosure statement, which people  should check to see that it does align with their own values.”

“The good news is that there is now a huge diversity of product offerings out there to match your own values, whatever they may be.”

As Rev Brian Carey believes, choosing to invest ethically can offer ways of living out your faith or moral values. Through investments, the church and individuals can show others  that things can be done the right way; by making a profit and living ethically at the same time.

“You can be an advocate for those in need,” he said. “It’s just as important as running a community service program.”

Find out more about the NSW/ACT Synod’s decision to divest in coal and coal seam gas at http://www.thetransitlounge.com.au/faith/item/875-how-divestment-happens.